Just wanted to write about a topic that would be fun reading and take our minds off COVID-19 and its effects ravaging the world – even for just a few minutes.

Let’s talk about watches.  At Robert Palma Designs, we specialize in fine watches and I have to admit, personally, I have a collection of watches and love to change my what I wear from time to time (get it? – “time to time”  Lol!)

Not all watches are created equal. In fact, some are in a league of their own. Combining impressive craftsmanship with a stylish aesthetic, luxury watches are so much more than simple accessories; they’re wearable works of art.

According to Forbes, the top 10 luxury watch brands are:

Rolex was the first brand to get its watches onto the wrists of world leaders. To commemorate its 100,000th watch mark, Rolex offered prime minister  Winston Churchill a rose gold Rolex Datejust, but it wasn’t until Lyndon B Johnson appeared in Time magazine wearing a Day-Date Perpetual Oyster Chronometer was when it became known as the “Rolex Presidential”.  More recently, Former U.S. President Barrack Obama wore a Jorg Gray chronograph

Between 2007 – 2015 (a gift from his secret service detail).  In March 2015, Obama doffed the Jorg Gray chronograph and started to wear a Fitbit Surge instead, according to London’s Daily Mail. In his post-president life, he’s been spotted wearing a Rolex Cellini.  As expected, Current U.S.  President, Donald Trump, has a love for gold and quite a watch collection.  While president, he as mostly commonly be spotted with a Vacheron Constantin Historiques Ultra-Fine 1968, a Rolex Day-Date “President” and a Patek Philippe Golden Ellipse. Former Vice President Joe Biden Biden has been known to wear a few watches, including an Omega Seamaster, a Citizen, and here a Tissot T-Touch.

Let’s take a look at what a few of the richest people in the world are wearing.  The world’s richest person, Jeff Bezos wears just 3 watches, his favorite being a $3,500 Ulysse Nardin Dual Time (the most updated version sells for about $7,700).  Bezos also wears a Breitling Chronomat 44 GMT (retails about $5,500) and a Patak Philippe Calatrava 5119G – leather band – this is the most expensive watch he wears and he does so only special occasions.  This one retails for roughly $22,000 but still quite conservative for the richest man on the planet. By comparison, the second richest person in the world,  Bill Gates (net worth is about US$110 billion) wears a $70 Casio Duro

Now on to other celebrities and athletes – this is where it gets really fun and entertaining.

Beyonce wears a limited edition $30,000 rose gold Apple Watch in a recently released image on her website. Mrs. Carter is one of the first celebrities to be seen with this watch.  It is her husband, Jay Z that wears the flash.  In 2013, Beyonce laid down a whopping $5 million on a custom made “Big Bang” from Hublot . It is encrusted with 1,282 diamonds and was given by Beyoncé to her husband Jay-Z on his 43rd birthday.

Like her friend, Donald Trump, Kim Kardashian West has a love for gold.  In 2017 the reality star purchased Jackie Kennedy’s timeless 18k gold 1962 Cartier tank wristwatch for nearly $400,000, though is is commonly photographed in “every day wear” with a yellow gold Rolex Datejust with the Rolex oyster bracelet.

Kylie Jenner seems to have a much larger array of watches than her sister.  The world’s youngest self made billionaire was gifted with a diamond-encrusted Audemars Piguet Royal Oak watch by boyfriend Travis Scott (NBA star, Lebron James sports this same watch – in the men’s version).  She also sports a rose gold version from the same watch maker.  She has also been spotted with a number of Cartier watches including a diamond Cartier Tank Anglaise,

One of Ryan Reynolds’ most unique timepieces is the Piaget Altiplano Scrimshaw Engraving Watch. The art of scrimshaw involves engraving on bone and ivory, followed by an application of pigment to bring out the design. Reynolds’ choice model features a falcon engraved on a dial of fossilised mammoth ivory. Ryan Reynolds is now The Piaget ambassador and wears the brand’s timepieces on his wrist on- and off-duty, but we’ve seen him wear other brands, too.  Ryan wears a Chopard Mille Miglia GTS Power Control Grigio Speciale in '6 Underground' and has photographed with an Omega Speedmaster Dark Side of The Moon and vintage Cartier Roadster Chronograph (The Nines).

In his role as assassin John Wick, actor Keanu Reeves wears a wears a Carl F. Bucherer Manero Autodate.  The brand is quickly developing a reputation for partnering with filmmakers who incorporate its watches directly into the action—as was the case in the 2017 action film Atomic Blonde, starring Charlize Theron.

Speaking of action stars, 007 James Bond – whom I believe is the quintessential “action star”, I assumed everyone from Sean Connery to Daniel Craig donned the Rolex Submariner.  My assumption was wrong, While Sean Connery’s character mostly wore the Rolex brand, he also wore a Gruen Precision 510 in You Only Live Twice and again in Diamonds are Forever. Interesting, Roger Moore wore digital timepieces from Seiko.  Timothy Dalton wore a TAG Heuer Professional Night-Dive.  Both Pierce Brosnan and Daniel Craig where an Omega Seamaster in all their movies.

I was wowed when NFL Super Bowl champ, Patrick Mahomes wore his self-purchased $47,000 Rolex Yacht Master 40 to the Kansas City Chiefs victory parade but that pales in comparison to Christiano Ronaldo’s, (Portuguese professional soccer star) $500,000 18k gold Rolex GMT-Master II Ice. Iit is encrusted with 30 carats of diamonds!!! This is the most expensive watch Rolex has ever created. However at $1.5 million Christian Ronaldo;s Frank Muller Round signature tourbillion trounces his Rolex.  This got me thinking about Hawaii’s own football superhero, Marcus Mariota.  Unfortunately, I couldn’t find anything.  The guy is so humble and down to earth, I would not be surprised if he wears an Apple Watch or maybe a Tag Heuer Carrera – my guess a leather band or maybe something from Breitling.  I will have to ponder more on this one.

Then there are some other notable time pieces that I need to mention. Ed Sheeran has a surprisingly large collection of very unique and refreshing watches. It’s the breadth and depth that astonishes. At one end of the spectrum, there’s the lairy, fresh-out-the-oven Richard Mille Evil Eye showpiece that is earmark “rocker”. And at the other, quietly considered, low-key Sturmanskie Gagarin Vintage which would make any serious watch collector do a double take were they to see it flash discreetly underneath the sleeve of one of his hoodies or t-shirts.  Moving from the music stage to the boxing ring – Floyd Mayweather’s Jacob & Co Billionaire, say it all about his love for flash.  It’s more a piece of jewelry than a watch, but when you already have jets and private chefs aplenty, what else is there but a $18 million timepiece?  Let’s hope he give more than that away to those in need than what he wears on his wrist.  But let’s face it, he’s fought for every penny!  Last but not least, Paul Newman’s personal ‘Paul Newman’ 1968 Rolex Cosmograph Daytona - the Holy Grail of classic timepieces.  There were only 2000 – 3000 of these watches ever made so the model itself if hard to come by.  But this Rolex Daytona owned by Paul Newman, a titan of Hollywood, sold at auction for a world record (at the time of its sale in 2017) $17.8 million.  A new record for the most expensive watch sold has since been set with the sale of a one-of-a-kind Patek Philippe Grandmaster Chime for $31 million in 2019.  The watch’s most unique feature is front and back dials — one salmon colored, the other black — that can be flipped or reversed. 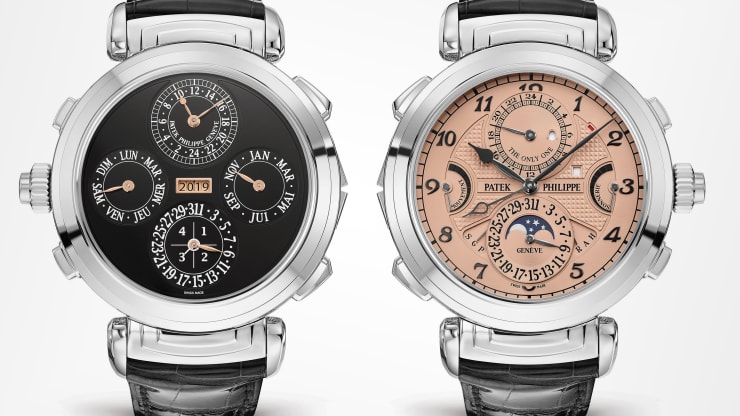 I like the idea of the Patek Philippe Grandmaster Chime  because its a watch that no one else on earth has.  In my opinion, I still revert back to customization of timepieces – especially if you can afford it.  Any fine watch can be customized.  Nearly every part of the EXTERIOR of a watch can be customized.  From the dial to the bezel, the case, the crystal, the hands to the strap/links.  Diamonds, precious gems, gold, platinum, rubber, ceramic, engraving/etched, almost anything you can think of.  Think it, Robert Palma Designs make it!  Remember, everything we do is built around you!

And while we are on watches – don’t forget to give us a call about servicing your fine time piece.