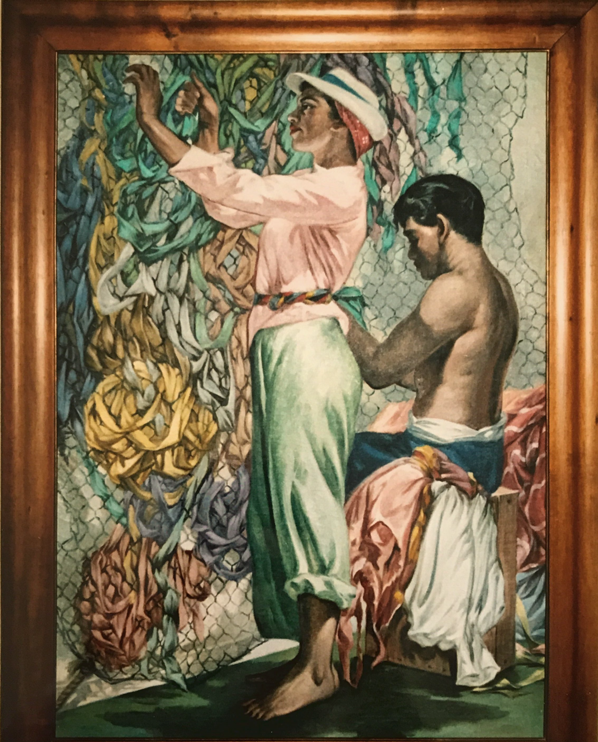 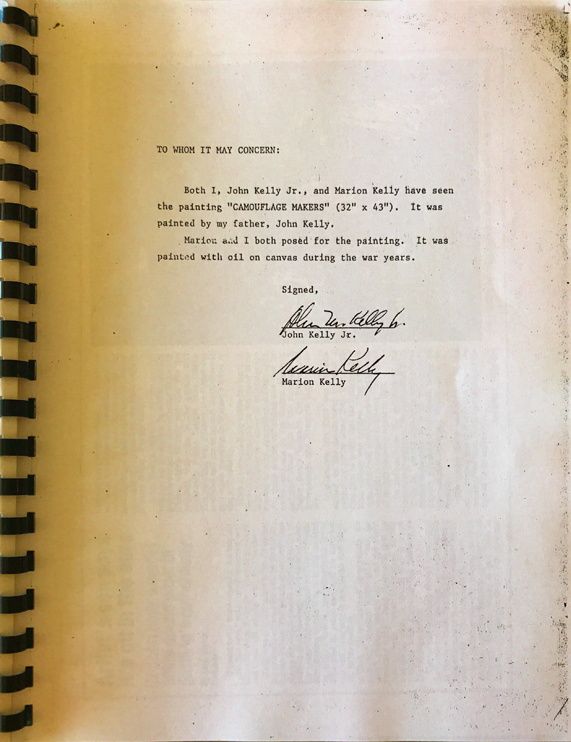 John Melville Kelly was a master printmaker, etcher and artist, often referred to as "Hawai'i's Gauguin." His work, widely regarded as exceptionally profound in composition as well as technique, resides in private collections and museums throughout the United States. Originally from the mainland, he was invited by developer Charles Frazier to illustrate a housing development in Lanikai in 1923, and never left. His art depicts the lives and culture of the people of Hawaii from the late 1920's through the early 1960’s.

Kelly’s most ubiquitous medium was aquatint, however he also produced a very small number of oil paintings. There are only three known, although it is suspected there may be up to around ten still in existence. Camouflage Makers is one of the known three. The other two include the signing of the sugar treaty with the Portuguese government, which currently resides in the Bishop Museum, and the other was last seen in the White House as it was gifted to Theodore Roosevelt, who was another great collector of Kelly’s work. The subject of that painting is unknown, making Camouflage Makers a rare Hawaiian masterpiece for more than one reason. Medium and size alone qualify the painting as extremely rare, but the subject matter and Hawaiiana characteristics of the piece make it truly unprecedented. It is the only known oil painting by John Kelly which depicts the quintessential Kelly trope of daily life in Old Hawaii, only otherwise represented in his prints. Furthermore, it is the only known oil painting of Marion who was the popular subject of his most famous aquatints and etchings. Also pictured with Marion is John Kelly’s son, who, with Marion, personally confirmed the authenticity of the piece some time after its creation when it was rediscovered in 1992. Camouflage Makers is also not to be confused with a John Kelly print titled “Camouflage Weavers” which was highly popularized in 1943 when it was distributed as the annual Christmas card for the Honolulu Star Bulletin; Making Camouflage Makers notable as the “original” from which this print was copied and mass distributed. (The owner also owns this Christmas Card print which will be passed along to the buyer upon purchase.)

The last time this painting came to market was 27 years ago in 1992, when the current owner purchased it from a Portlock resident.

Other Kelly oil paintings, of the small number that exist on the private market, have been offered close to a seven figure range in the past. The last known offer this high was 8 years ago.

Asking 300k but will go to the highest bidder.